I was so excited about this race!  Firstly, it’s a new race distance, a 12K (right at 7.45 miles) and we were all “dressing” up for this one in cute festive wear!

The Reindeer Fun Run 12K’s of Christmas (and 5K) is located in the cute quaint town of Aberdeen which is about 1:20 away from where we live.  Since the race started at 9am, we were able to leave early this morning and head to the race just in time to pick up our packets.  Christie found the race from a Facebook ad, we think, either way, we are glad that she did!  For only $28, this race was a steal!  The cute little reindeer logo sold us! 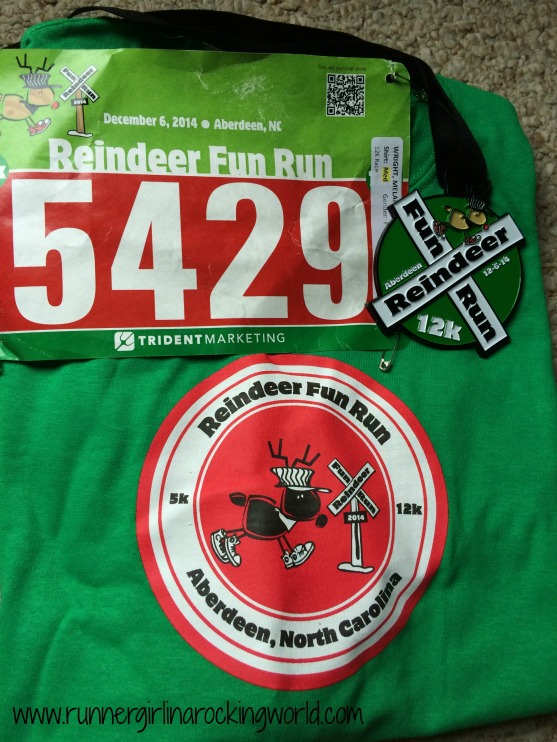 We arrived in Aberdeen right at 8:15am and were able to hit the packet pickup to get our bibs, race tee (long sleeve green tee), antlers, a drawstring race bag and mason jar glass.  We were stoked!! There were more goodies in the drawstring bag then we’ve had in some half marathons.  We took some quick pictures, hit the port-a-pottie line and headed to the start with just a few minutes to spare.  The 12K is the smaller of the two events (the 5K had 1300 runners) with just 389 runners.   Christine and I were sticking with our MHR plan for the race and quickly found our groove. 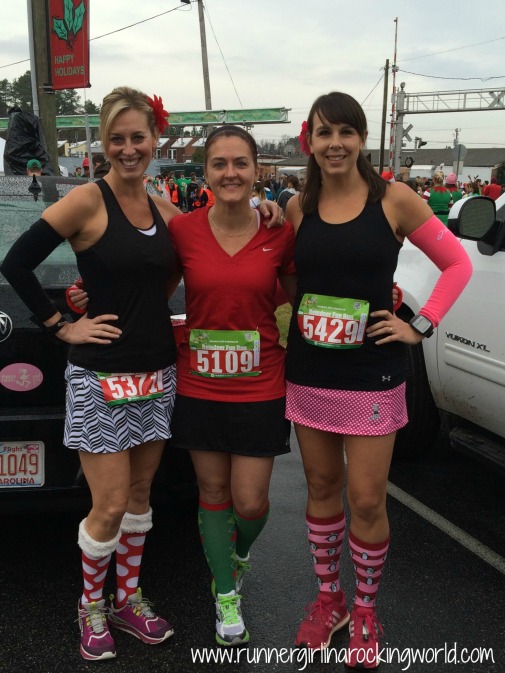 Right out of the gate, we ran just a bit downhill and then the “fun” started!  Hills and more hills.  Seriously, this race was no joke.  Neither one of us had looked at the course map or the elevation, so we were a little surprised.  We knew we weren’t in this one to race it, but to stick with our training, but still.  Just when we thought we were at the top of a hill, we curve just a bit, only to keep climbing.  At one point, I told Christine I thought I was running City of Oaks again.

The course was pretty and surrounded by numerous train tracks and bridge crossings.  It was a peaceful.  Once we left the town, we were running on country roads.  We kept up a really great pace and we felt really good, despite all the hills.  Once we reached 3.75 miles, there was a small turn around and we thought surely, the hills had to let up at some point.  Nope.  They just kept coming and we continued to run up them.  I noticed at this point, Christine and I were starting to pass a lot of runners.  We hadn’t pushed on any hills (thank you MHR!) so we weren’t wearing ourselves out.  It wasn’t until 4-4.5 that we had to stop to walk for the first time for just a minute to bring us back in check.  We quickly recovered and went back at it.

Around mile 5, we could hear a train whistle.  It went on for a while and we didn’t really think much of it.  As we were running, it was getting louder.  Suddenly, we see a police officer motioning to runners to “come on” by waving his hands and yelling “RUN!  Hurry if you want to beat the train!”  Christine and I looked at each other and took off.  We were crossing train tracks and there was a train coming right through the race.  We picked it up and got across just in time!  The stop arms came down and a group of runners were all stopped, waiting for the train to pass.  We laughed so hard!!  Never has that EVER happened in a race before!  A first for sure!

We cruised along a familiar part of the course (we ran it earlier around mile 2) and we knew that we had one more climb until we reached the downhill finish.  We stopped to walk just a bit because we were still not recovered from our “beat the train” sprint.  We saw a fellow runner from a Facebook group I’m in for mile a day runners and we gave her some love as we turned the corner making our way to the finish line.  As promised, there was a downhill finish!  We just rolled in to the finish line, smiling and feeling amazing!  We finished feeling great! 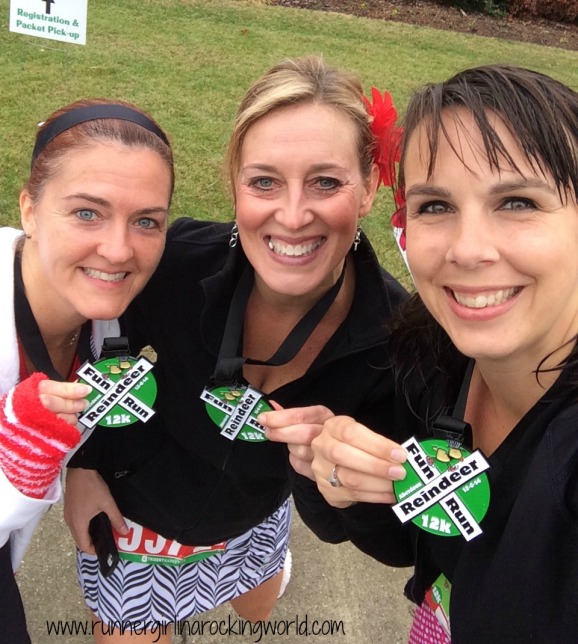 We met up with Christie and we walked around the post race festivities, taking pictures here and there.  Right in the town, there were some cabooses parked, which made a great photo!  The whole town is super cute and it really put us in the holiday mood.  We stayed to watch the Egg Nog Jog (the kiddie race) for just a bit and cheered on some little runners.

We finished the morning off with lunch at a nearby restaurant, The Railhouse Brewery, to celebrate our fun run!

The town is so cute!  It’s the perfect race to put you in the holiday mood!  I love the unique 12K distance.  For the price of the race, it’s a steal!  The shirt and medal alone are worth the price, add in the drawstring bag and antlers, and it’s almost too good to be true!  The course was scenic and well marked.  The water stop were stocked well, although when we came back through on our last lap, they were out of cups.  With just over a mile left, it wasn’t a big deal.  The downhill finish was awesome!!  The post race festivities were fun!  There was a lot to do for children.  We enjoyed just walking around and taking pictures.

The hills.  If we would have checked out the course beforehand, that might have better prepared us.  It is in the Sandhills of NC, so there are hills, but we just didn’t think there could be that many.   Some climbs lasted for 3/4 of a mile.  Other than that, I really can’t think of anything.  I thought it was a great event!

I am excited to go back next year and run this one!  It’s so fun when we find new events to run!  Next weekend, we’re running another new event, Huntersville Half Marathon.

Have you run or are you planning to run any holiday themed events?